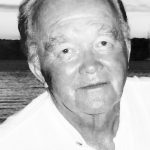 Donald John Kyro passed away unexpectedly on Thanksgiving Day, November 23, 2017 at the age of 79.

Don was the first-born son to Sulo John Kyro and Ruth Marion (Keksie) Kyro on April 25, 1938. He was born on the family farm in rural Sebeka, Paddock Township in Otter Tail County, and was the oldest of thirteen children. As a boy, Finnish was his first language while attending country school. He graduated from Sebeka High School in 1956 and retired after a 42-year career working as an installer for Western Electric, which became AT&T.

Don enjoyed the outdoors, fishing, reading and getting some sun. He taught himself to play the guitar at a young age and continued learning and enjoying guitar music his whole life. He was a fine craftsman and built an acoustic guitar in his basement shop. His other passions included cooking, fine dining, the Minnesota Vikings, ballroom dancing and nutrition.

He was a man of faith who loved his family and especially found joy in his grandchildren and great grandchildren.

He is proceeded in death by his parents, John and Ruth; brothers Roger Kyro and Richard Kyro and his sister Kathy Steele.

Visitation will be from 10-11 a.m., followed by the services at 11 a.m. on Saturday, December 2 at Nelson-Doran Funeral Home in Brainerd.

Arrangements are by Nelson-Doran Funeral Home of Brainerd. Online condolences may be left at www.nelson-doran.com.