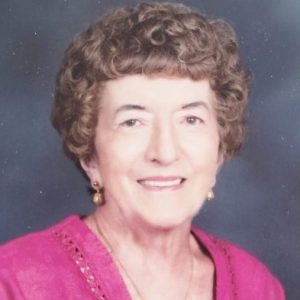 Lillian “Lil” Elsie Gangelhoff Howard passed away on March 1, 2022 in Clearwater, Florida. She was born to Fred J. and Hilda Gangelhoff on May 17, 1929 in Hartford, Wisconsin where she was baptized at Peace Lutheran Church and became a child of God.
Shortly thereafter the family moved back to Cass Lake and Fred started the Deep Rock Station in downtown Cass Lake. And in 1939 her father and mother developed Stony Point Resort which is owned today by the third generation of the Ganglehoff family. In 1944 Lil’s father purchased property in Clearwater, Florida and in 1947, he opened “Gangelhoff’s Delux Motel,” Clearwater’s first mainland motel. The family then began their annual travels and would operate the resort in Minnesota in the summer and the motel in the winter in Florida.
Lil was a 1947 graduate of Clearwater High School. On November 2, 1952, Lil married Lamar Howard in Clearwater, Florida. Lil and Lamar were blessed with four children: Stephen, Timothy, Rick and Yvonne during their loving union of 28 years. Lamar passed away on January 30, 1981. She continued to persevere, never losing sight of her faith, which enabled her to put one foot in front of another. Throughout the difficulties, she remained a devoted mother and ardent business woman running the motel with her brother Delbert after her parents retired. She was a member of First Lutheran Church where she taught Sunday School, was a member of the Altar Guild, the LWML, Stephen Ministry and sang in the choir.
In 1996, as part of her involvement in the Stephen Ministry, she was introduced to Kurt Hesebeck, They formed a special relationship that lasted for the remainder of her life. They were both committed to serving their Lord and Savior Jesus Christ. She was preceded in death by her parents Fred and Hilda, her husband Lamar, her son Stephen and brothers Ron, Delbert and Dave along with four other siblings that died in infancy.
She is lovingly survived by her children: Timothy Howard, Fredrick (Malinda) Howard, and Yvonne (Joseph) Silcox, all of Clearwater; daughter-in-law Jacalyn Howard of Blackduck; and by her devoted companion Kurt Hesebeck of Largo, Florida. Lil’s children blessed her with 12 grandchildren and 16 great-grandchildren who will miss her dearly. She is also survived by her brother, Fred Gangelhoff, Ocala, Florida; sister Sharon (Arvin) Gieseke of Cass Lake; her numerous nieces and nephews; as well as her sisters-in-law: Doris, Kay and Lori Ganglehoff.