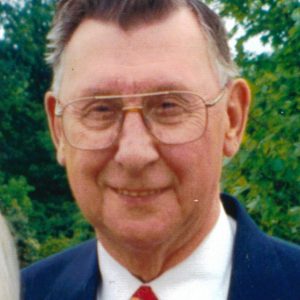 Lloyd Schrum, 94, of West Chester, Ohio, formerly of Park Rapids, Minnesota, peacefully passed away with his children at his side on October 4, 2021.
Lloyd was born August 2, 1927 near Lake Park, Minnesota to Louis and Marie (Ohrt) Schrum. He attended the Lake Park schools. Lloyd was drafted into the Army-Air Corps in 1945 and served until 1947. In 1951 Lloyd enlisted in the Air Force and after attaining the rank of Tech. Sergeant, he was honorably discharged in 1955. Lloyd served as the chief clerk of the base hospital at Offutt Air Force Base. Lloyd moved to Park Rapids where he married Carol Mae Oxtra on August 21, 1955.
The couple moved to Bemidji where Lloyd attended Bemidji State College earning a BS and an MA in secondary education. In 1959 Lloyd and Carol moved to Esko, Mn where Terri was born. Lloyd taught industrial arts for two years at Esko High School. In 1961 the family moved to New Brighton, Mn where Alan was born. Lloyd was an original staff member of St. Anthony Village High School and taught there until retiring in 1986 and again in 1989.
Lloyd was baptized and confirmed in the Dorset Lutheran Church as an adult. He was always an active member of St Philips (Fridley,Mn), Calvary (Park Rapids) and Peace (Nevis, Mn) Lutheran churches. He served as an usher, a lay reader, a counter, an adult and confirmation instructor, and on the board.
Lloyd and Carol retired to Park Rapids in 1993 and built their retirement home on Carol’s childhood farm. They were active in Friendly Squares Dancers as well as The Antique Tractor and Engine Club. They enjoyed tractor square dancing with their matching set of C Farmalls performing in parades and shows. Lloyd was an active member of the Lion’s Club, the American Legion and Meals-on-Wheels.
Lloyd and Carol enjoyed traveling throughout Europe, Asia, South America and the United States. Lloyd will long be remembered for his devotion to his family and friends and his service and kindness to everyone he met. He was a true servant of God.
Lloyd will be lovingly remembered by his daughter Terri (Royce) Schultz of West Chester, OH; his son Alan (Cindy) Schrum of Mounds View, MN; his granddaughters: Brook Mae and (Elliot) Wong of Lebanon, OH, and Blythe Mae (Steven) Lovewell of New Albany, IN; and great grandchildren: Emma Mae, Owen Elliot and Anna Lynn Wong and Grant Steven and Garrett Royce Lovewell; and his nephew Jerry Weaver of Park Rapids, MN.
Lloyd was preceded in death by his wife, Carol, his parents, Louis and Marie Schrum, his sister Helen Weaver, his niece Sharon Koskela, his mother and father-in-law, Martin and Alma Oxtra, and his best friend, Tom Holden.
A funeral for Carol and Lloyd is planned for June 25, 2022 at Calvary Lutheran Church at 11 a.m.
Arrangements are with the Jones Pearson Funeral Home of Park Rapids. Online condolences may be left at www.jonespearson.com.