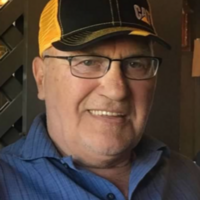 Robert (Bob) Pickar passed away at his home on June 19, 2022, under the care of hospice surrounded by his family.
Bob was born on March 22, 1944 in St Louis County, MN to Albert and Ann Pickar. In 1945 the family moved to North Germany TWP where Robert grew up and attended Sebeka school.
On July 2, 1966 Robert married Connie Perkins and together they raised four children.
Bob was a heavy equipment operator and a member of the local 49er union. In 1975, Bob started his own business of road maintenance and excavating. He loved the challenges of excavating and often went places that others would not go. In 2004 he sold the business and continued to do construction work until he retired in 2011.
Bob had a love for traveling, welding, tinkering in the garage, and four wheeling. He enjoyed spending time with his children and playing with his grandchildren, and great grandchildren.
Robert is survived by his loving wife Connie of 55 years and children: Renae (Rollie) Tiernan, Colleen (Mike) Rosonke, Kathryn Pickar, and Eric Pickar; grandchildren and great grandchildren: Elicia (Mike) Guadette, Mason, Wyatt, Lincoln; Vincent and Jack Tiernan; Jacob (Molly) Rosonke, Lane and Albert; Elisabeth Rosonke and Beau. Tristan and Addison Pickar; Owen Pickar, and one sister Hazel VonBank.
Robert is preceded in death by his parents Albert and Ann Pickar, and his brothers: Larry, Richard, and Roger and his father and mother-in-law, Lawrence and Lila Perkins.
Memorial Services will be held at 11 a.m. on Friday, July 1, 2022 at the United Methodist Church in Sebeka, MN with visitation one hour prior to the service. Inurnment will be at West Lyons Cemetery.
Arrangements are entrusted to Wevley Funeral Home of Sebeka. Online condolences may be left at www.wevleyfuneralhome.com.