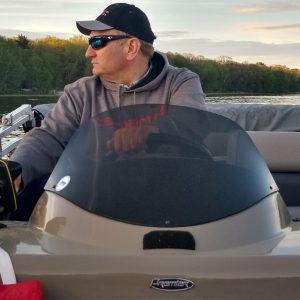 Ross passed away unexpectedly on June 19, 2022 at St. Joseph’s Hospital in Park Rapids, Minnesota.
The funeral service in his honor will be held July 16, 2022 at Hubbard United Methodist Church, in Hubbard at 11 a.m.
The youngest son of Pat (Bender) and Frank Beaumont, he was born in the middle of a snow storm that shut down the whole state, on March 3, 1965, at Wesley Hospital, Wadena, Minnesota. The family home was in Sebeka where he was baptized and confirmed in the Lutheran faith. He attended Sebeka School and graduated in 1983. He was active there as student manager of several sports teams. He next attended Wadena Technical College where he earned a degree in telephone line man. He held several jobs working for Chevrolet in Wadena, Sebeka and Long Prairie before joining the property management company, DW Jones. He had been with them for 28 years and was still employed there at the time of his passing.
He was an active citizen of Sebeka, serving on the City Council, a Fireman and First Responder. He also worked for the DNR at the Nimrod Fire Tower, first as a fire fighter and later as a dispatcher. Probably his most rewarding job of all was the Sebeka School Bus he drove for 28 years. He had many routes through the years but was driving his favorite, west of Sebeka, which he had just finished at the end of the school year. He loved the kids and they were his family. He always treated them to gift certificates, or $2 bills at the end of each year. He even planned to drive for Menahga Schools when he was retired!
He co-owned a beautiful summer home on Duck Lake, and he bought a huge pontoon and used it only to tour family and friends around his dear lake! Absolutely NO FISHING allowed!! He loved to relax with a glass of iced tea, in a chair viewing the lake, and enjoy what he called “the million dollar breeze!”
Survivors include his mother, Pat Beaumont (Menahga), brother Paul Beaumont and family (Highland, California and Park Rapids), two half sisters and three half brothers including Holly Finer and family (Bloomington), Lynn Hanson and family (Delano), David Barnum and family (Nevis), Scott Barnum and family (Bloomington),and Greg Beaumont and Family (Rockville); aunts: Cynthia White (Bemidji), and Marguerite Kause (Vienna, VA); special friends: Henrik Dannert (Stockholm, Sweden), and Scott Wilson (Park Rapids); his significant other Mindy Tanner and their precious dog, Atlas (Menahga), many nieces, nephews and cousins – too numerous to mention.
He was predeceased by his father, Frank Beaumont and his grandparents (Bender and Beaumont), plus nieces and nephews.
So we say farewell to this BIG, handsome generous, caring man, as he drives his favorite school bus to heaven! Please come to his service prepared to share a favorite memory of Ross and to dress casually as he would! His friend Pastor Loren Ferch will conduct the service. Also join us for visiting and lunch after the service in the fellowship hall.
The family requests that memorials be sent to Sebeka School, District 820 to be used for the fund at the BUS GARAGE (hopefully to build a new facility).