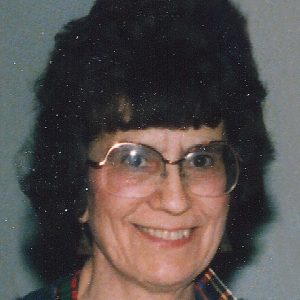 Maxine Louise Carter, 92, of Park Rapids, Minnesota, died on July 20, 2022, at her home in Straight River Township. Maxine was born on December 16, 1929, in Mottville, Michigan, to Lawrence Russell Kulp and Irene (née Tavernier) Kulp.
From birth through high school, Maxine lived in Mottville, Michigan. In 1946, she graduated from Constantine High School, Constantine, Michigan. She started her young adult life in Chicago with a clerical job at Moody Bible Institute (MBI), where she eventually became a full-time student. Her MBI training included inner city Chicago youth work. Maxine graduated from MBI in June 1954 with a diploma in Christian Education.
On July 17, 1954, Maxine married her college classmate Russell Clinton Carter (who was from rural Mottville) at Mottville Bible Church in Mottville, Michigan. She called him “Russ.” He called her “Maggie.”
In October 1954, Maxine and Russell arrived in Straight River Township near Park Rapids, Minnesota, where they worked until 1966 in rural missions associated with Oak Hills Fellowship of Bemidji, Minnesota. Between the years of 1955 and 1965, Maxine gave birth to their seven children.
During their time with Oak Hills Fellowship, Maxine and Russell served at two rural chapels, holding Sunday school and worship services, and conducted yearly Vacation Bible Schools (VBS) in four locations. They taught an Oak Hills Bible Institute curriculum at “released time” classes in country schools and also in Park Rapids, Menahga, and Osage schools. From the late 1960s to the 1980s, Maxine and her family attended First Baptist Church of Osage (now Grace Community Church of Osage), where she served as pianist and organist. More recently, Maxine attended Faith Baptist (now Faithbridge) Church in Park Rapids, where she served as an AWANA listener and a member of the Faith Missionary Circle.
On the growing Carter family farm, Maxine worked as bookkeeper, sales staff manager, sales clerk, and organizer. She was a cornerstone in the family work of planting, harvesting, processing, delivering, and selling produce. She was a 4-H leader, a skilled seamstress, and a creative cook who liked to try out new recipes. Working hand-in-hand with her husband and mothering her seven children, Maxine was queen and servant.
“Mother Maggie” (as she often signed her name) welcomed to her farm home her friends and her children’s many friends from all over the world. And Maxine herself traveled to Guatemala; Colombia; Canada; Kenya (which included wild elephant encounters on a safari); Indonesia; Germany; Holland; and all over the United States, from Florida to Washington state, from Vermont to California. She hosted an exchange student from Japan and took Spanish language classes.
Maxine constantly pursued new things. She took square dance lessons, water exercise classes, a calligraphy class, a music history class, and on Sunday afternoons she would read the encyclopedia for entertainment. She wanted to join a clogging group for ladies, but she just couldn’t find a buddy to join her!
Classical and sacred music filled her home. Maxine played the accordion, piano, organ, and cello. She taught piano lessons to children from the community as well as to all seven of her children, and she accompanied her husband and many others on piano and organ. Over the years, she served various church fellowships as pianist, organist, and choir singer.
In recent years, she enjoyed living in her house in the woods, playing her baby grand piano, attending concerts, collecting teddy bears, touring the farm in her golf cart, and keeping track of everything her family was doing. “Mama” (as her children called her) was stoic, but witty. She was humble, but classy. One of her children wrote that Mama “quietly held the world together.”
In the last several years of her life, she shared a home with her daughter Rita and her family, who cared for her together.
On her last day, as she passed away, a number of her children and grandchildren were at her side. That afternoon, Maxine shared her wonder that God could love her so much.
Maxine was preceded in death by her husband, her parents, her sister (Doris June Warren), her brother (James LaVern Kulp), and a great-granddaughter (Cora Mary Ellen Carter).
Maxine is survived by her seven children: Paul (Lori) Carter of Des Moines, Iowa; Dwight Carter of Frutas del Mundo Farm, El Amatillo Village, Izabal, Guatemala; Carla (Al) Kehler of Winnipeg, Manitoba; Mark (Beth) Carter of Twin Falls, Idaho; Jonathan (Julia) Carter of Park Rapids, Minnesota; Rita (David) Blake of Park Rapids, Minnesota; and Anthony (LindaSue) Carter of Rapid City, South Dakota. She leaves twenty grandchildren and ten great-grandchildren (and at least two more in the womb).
Maxine, like her husband, donated her body to the University of North Dakota School of Medicine and Health Sciences.
The Carter family will host a memorial service at Faithbridge Church in Park Rapids, Minnesota, at 3:00 p.m. on Saturday, July 30, 2022. Visitation will be held at the church one hour prior to the service.
Arrangements were entrusted Jones Pearson Funeral Home of Park Rapids. To leave online condolences or to view the video tribute, please visit www.jonespearson.com.