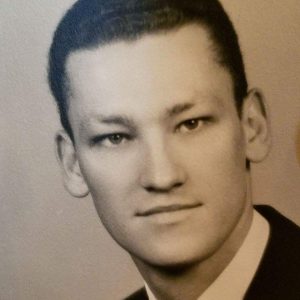 Born on a cold November 18th day, 1926 to Joseph and Mary (Reuter) Letendre, Don was “an Ice Man’s son.” There was no refrigeration in the 1920’s or during the Great Depression. Don’s father owned “Imperial Ice Company” in Cass Lake, and Don would tell stories of his dad hand sawing lake ice into large blocks, hauled by a team of horses to sawdust-filled barns and to customers for one cent per pound.
Don attended Catholic Church, was an altar boy, loved being with family, friends, and his beloved dogs “Rex” and “Chow.” He was witty, fun-loving and had many interests – from playing Jax to basketball, swimming to ice skating, blueberry picking to walleye fishing, reading, writing and Shakespeare to running and dancing to Big Bands such as Glenn Miller and Tommy and Jimmy Dorsey. Music and radio were a huge part of Don’s life. He also played snare drum in school. Don placed first in the 440 Yard Dash on dirt with a record breaking 55 seconds as a senior in the District track meet, won a pair’s dance contest, played basketball in school, and played on Bemidji State Teachers College 1944 undefeated Football team.
Don worked hard, long hours, first in grocery stores earning $14 a week. A treat would be a five cent Snickers or a 15-cent movie. Don and teenage friends also fought fires. Don graduated from Cass Lake in 1944, trained and served in the Navy during WWII as a ships cook on Patrol Craft 549 off the coast of Yokohama, Japan, majored in English, Literature, Journalism and Theatre Directing at Bemidji State Teachers College, earned his Teacher’s Degree in 1950.
He loved teaching – first at Barnesville High School for six years, then at Franklin Jr. High in Brainerd for 29 years. Don also worked every summer – as a Cook for many years at Boy Scout Camp near Merrifield, at Meyer’s Cleaners, Holiday Gas Station, and more.
Don continued to enjoy playing and watching basketball, making friendships, relaxing in the sauna at the YMCA, reading and telling stories, chatting with former students and teachers he’d “bump into” while grocery shopping. Throughout his life, Don could take almost every sentence (anyone spoke) and “rattle off” or sing a song containing those words. Don loved cats, too, and cherished his many years with “Kitten”, and later “Kitty.”
At age 95, Don contracted Covid-19, and within six months, passed away on July 31, 2022, from complications of a stroke. Don was patriotic, kind, caring and had a great sense of humor. He is dearly missed by all. Don is survived by his daughter, Janine (Bob) Kelling of Brainerd, grandson Jeremy Schwendeman of Zimmerman, granddaughter Jennifer (John) Thompson of Prescott Valley, AZ, and many nieces and nephews. Don was preceded in death by his parents, daughter Nanette Schwendeman, wife LuVerne Letendre, and older siblings.
Visitation was 10 a.m. – noon Saturday, August 6, 2022, at Nelson-Doran Funeral Home in Brainerd, Service at Noon, followed by Military Honors, Interment at Evergreen Cemetery, and lunch.
Don lived a full, wonderful life, and thank you to all who sweetened it!
Arrangements are with the Nelson-Doran Funeral Home, Brainerd.