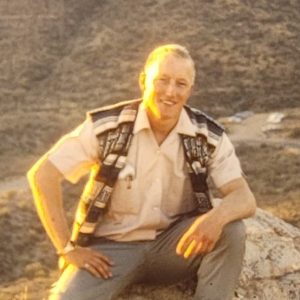 Harold Ronald Pauna of Spokane, WA died in his home on August 19, 2022. He was 78 years old. Harold was born to Richard and Ida (Stahl) Pauna on February 11, 1944 at home in Ottertail County. He graduated from Menahga High School and went to college for a short time before enlisting with the National Guard for six years.
Harold was a hard worker running a farm for 20 years. After farming he had numerous jobs and worked diligently at each one. Whenever he could get away for a day, he would fish or hunt. He also loved to drive and take road trips.
Harold was united in marriage to LaVonne Lockhart on June 12, 1988. He lived in Minnesota for 56 years before moving to Spokane, WA with his wife LaVonne and daughter, Faith. He worked on a ranch taking care of the horses, helping to establish a vineyard, fixing farm equipment, fencing and occasional landscaping. He was diagnosed with Parkinson’s disease in 2001. He continued to work hard until 2012 when things got too hard with his disease. He had a hard time quitting because he loved working, but he did continue to fish until the disease took that away too.
He is survived by his wife, LaVonne Pauna of Spokane, WA; his daughter Paula (Mark) Sanford of Callahan, FL, Nicole (Mike) Nelson of Craig, AK, Melissa (Kyle) Weikel of Park Rapids, and Faith Pauna of Spokane, WA; five grandchildren, three stepchildren and five step grandchildren, sister Irene (Gary) Olufson and sister-in-law Mary Pauna.
He was preceded in death by his parents, brothers Donald Pauna and Arnold Pauna and sister Ellen Anderson and Arlene Makela.