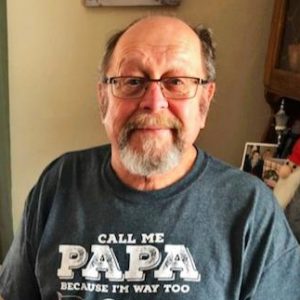 Russell Melvin Jacob, 76 of Menahga, MN died Sunday, August 28, 2022 at Essentia Health in Fargo, ND surrounded by his family.
Russell was born October 21, 1945 at Wesley Hospital in Wadena, MN.
He grew up in Menahga, graduating from Menahga High School in 1963.
After graduation, he worked at a paper mill in Camas, WA before being drafted to the United States Army in 1965. He was stationed at Fort Leonard Wood, MO where he was a clerk during the Vietnam War. He was honorably discharged. Following his Army service, Russ worked for a time at the Twin Cities Army Ammunition Plant alongside his sister Gwen and brother-in-law Tom Larson. Russ moved back to Menahga and married Elaine Ihme on March 1st, 1969.
Russ then worked in road construction for the remainder of his career.
He first worked for Strom Construction of Moorhead, MN, then for Veit Construction of Rogers, MN until he retired. Russ could proudly tell you every road he ever built. When starting a new project Russ often said he was going to be working so far away that they would need to “pump in daylight.”
Russ had a passion for his Harley-Davidson motorcycles and loved cruising the backroads. He always kept his motorcycle and pickup in tip top shape.
Russ is survived by his wife of 52 years, Elaine; daughters: Shawn (Steven) White of Blackwell, OK, and Shelley (Dustin) Lof of Park Rapids; brother Merle “Zeke” (Lyn) Jacob of Menahga; sister Gwen (Tom) Larson of Kuna, ID; grandchildren: Darren Jacob of Osage, Mariah White of Daphne, AL, Jacob and Alex Lof of Park Rapids, and many nieces and nephews.
Russ was preceded in death by his parents, Melvin and Lorraine Jacob.
Live to Ride, Ride to Live, Dad. We love you.
A memorial service will be held on Saturday, September 10, 2022, 11 a.m.
Arrangements are entrusted to Wevley Funeral Home of Sebeka. Online condolences may be left at www.wevleyfuneralhome.com.9-7cRuss Jacob