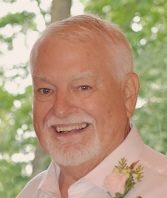 Dennis Lee Saak was gently escorted to heaven surrounded by his family on Saturday, September 3, 2022 at 2 p.m He struggled with multiple health issues over the last few years and faced these with strength, humor, and courage.
Dennis was born to A.J. and Beverly Jean Brokaw Saak on September 1, 1948. After graduating from Cedar Falls Iowa High School and attending the University of Northern Iowa, he married Dianne Marie Lechelt, his wife of 49 years. They have two daughters, Jennifer and Katie.
Dennis spent the early part of his married life working as a police officer in Cedar Falls, Iowa from 1973-1979.
In 1979 the couple packed up their two small children and followed their dream of owning a resort in northern Minnesota. They bought Lonesome Pine Resort on Bay Lake and operated it from 1979-1984. After selling they bought WildRidge Resort and lived there for 30+ years. Dennis was deeply committed to the Nevis community. He was a member of Peace Lutheran Church and served on the Nevis school board for 12 years. Dennis was known for his kindness, quick wit, sense of humor, and occasional prank. He was a “good ol’ boy” who loved God, country and family. He enjoyed traveling, golfing, fishing, hunting, meeting his resort buddies for breakfast and joining his friend Walt for an occasional “toddie” at the Nevis Muni. He loved fishing with his best fishing buddy, Jennifer, and looked forward to his yearly Canadian fishing trips with his father A.J.
Dennis had a deep love for his children and grandchildren! He was so very proud of each of them and said many times what a lucky guy he was!
One of his greatest joys was coaching and nurturing the love of sports in those close to him. He spent many hours “shooting hoops” with his daughter Katie, then later dedicating his time to support his grandchildren’s high school and college sports careers. He was a consistent presence at every meet, event, fundraiser for Walker Wolves wrestling and in between squeezed in numerous Detroit Lakes swimming events. Over the years Dennis made hundreds of peanut butter and jelly sandwiches to “tie the boys over” at their day-long events. In recent years “Gramps” continued to proudly support his grandson Collin’s emerging Mixed Martial Arts career and always excitedly looked forward to each of his upcoming fights. Dennis will be so missed!
Dennis is survived by his wife, Dianne Marie Lechelt Saak of Nevis; father, A.J. Saak and brother, Guy Saak both of Cedar Falls, IA; daughters: Jennifer (Warren) Scouton of Nevis, and Katie (Corey) Steinke of Detroit Lakes; 18 grandchildren: Collin Huckbody, Kenny Huckbody, Skyler Huckbody, Alex Huckbody, Ivy Huckbody, Kaitlyn Huckbody, Halley Jo Huckbody, Amy Huckbody, Sydney Huckbody, Danielle (Miguel) Huckbody, David Ryan Huckbody, Sarah Scouton, Cruze Scouton, Simon (Ravanna) Steinke, Lucy (Nicholas) Steinke Olson, Abram Steinke, Brian (Madison) Scouton, Alisha (Kyle) Scouton; six great-grandchildren: Maverick Steinke, Mila Norton, Aaliyah Huckbody, Emma Malm, Abigail Malm, and Henry Malm; ex-son-in-law, Trent Huckbody; and best friends of 50 years, Dean and Becky Williams of Cedar Falls, IA.
He is preceded in death by his mother, Beverly (Brokaw) Saak; and granddaughter, Deslin Huckbody.
Funeral services will be held Saturday, October 1, 2022 at 11 a.m. at Peace Lutheran in Nevis, MN. Visitation is for 1 hour prior to the service at the church.
Arrangements by the Cease Family Funeral Home of Park Rapids, MN. Friends may leave online condolences at ceasefuneralhome.com.