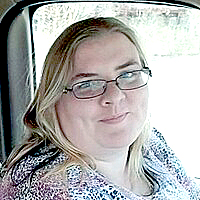 Threasa Marie Esser, age 33, a lifelong area resident currently of Akeley, passed from this life to eternal life following a short illness at the Essentia Medical Center of Fargo, with her mother Donna, and her boyfriend, Nick both at her side.
Threasa was born on July 19, 1989 in Park Rapids, MN to Ronald and Donna Esser. She spent one year of elementary school in Park Rapids before moving over to the Nevis Public school where she graduated with the High School Class of 2007. As a young woman she gained employment with West 40 Restaurant and at the Walmart Pharmacy in Bemidji, and the Northern Convenience Store in Park Rapids. At the time of her death, she was working at T & M Express and Zappy’s Café both of Akeley. She was also a member of the Akeley Fire Department.
In her spare time, she loved to work on crafts of all kinds. She loved the outdoors especially when she could be hunting or fishing. She loved animals and was especially close to her dog, Nellie, and her cats. She was known for her outgoing and forgiving spirit.
She will be lovingly remembered by her boyfriend, Nick Goehring of Akeley; her mother, Donna (John) Carter of Nevis; her grandmother, Kay Hellkamp of Park Rapids; also her beloved aunt: Kim (Alan Denny) Hellkamp of Rochester; uncles Mitch (Shawn) Hellkamp of Coon Rapids, Mark (Deb) Hellkamp of Park Rapids, Henry (Deb) Esser of Park Rapids, and Dale Esser of Carrington, North Dakota, special aunt Kathy (Keith) Becker of Park Rapids and many dearly loved cousins.
Threasa was preceded in death by her father, Ronald Esser who passed away in 2001, her grandfather Donald Hellkamp and grandparents Henry and Gloria Esser.
Services will be held 11 a.m. on Monday, September 26 at the First English Lutheran Church in Dorset with Rev. Chris Davis. Visitation will begin at 10 a.m. at the church. Burial of the urn will follow the service at the Dudley Memorial Cemetery.
Arrangements were entrusted to Jones-Pearson Funeral Home of Park Rapids. For more information, please call the Jones-Pearson Funeral Home at 218-732-5131.