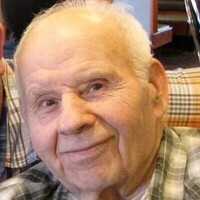 Gilbert William (Bill) Boyer passed away October 4, 2022 at Providence Villa in Sebeka, Minnesota with his daughter Diane holding his hand. He had 90 years of life accomplished.
Bill was born March 7, 1932 to Marcus and Abiecie Boyer in Rockwood Township, Wadena County, Minnesota. He was the baby of six children. He lived his entire life on the family farm. The Boyer farm is a registered Minnesota Century Farm, purchased by Marcus Boyer in 1917.
He held many jobs through the years, including Wadena Sawmill, Kruzenburger Construction and selling Saladmaster Cookware but foremost were farming and milking cows. He married Delora May Hagerman on April 4, 1953 at Hope Chapel in Verndale, MN. Their marriage brought five children whom they raised on the family farm.
One of Bill’s joys was his pet deer Bambi. Even in his later years as his memory faded he carried a picture of Bambi in his shirt pocket and showed it to everyone he could.
His grandchildren meant the world to him and brought many smiles and much pride to him.
Bill used to love going to auction sales sometimes dragging home items Delora wasn’t thrilled about. Bill enjoyed fishing. Spending time at Shell Lake with his family and with his brothers and their families. Eventually learning to fillet a northern pike to get rid of the Y bones. Bill loved to make people laugh, whether it was with a “recipe box” that when the lid was opened a rubber mouse came up or by folding a dollar bill into a rectangle that let George Washington peak through an opening. Even when staying in the hospital he would sneak candy into the nurses pockets and grin.
Bill is survived by his children: Wanda of Wadena, Jim (Jodi Kryzer) of Faribault, Diane (Doran) Downer of Huntersville, and De (Jeff Crocker) of Mesa, AZ; sister in law Arla Tolppi of Sebeka. Many beloved grandchildren, great grandchildren, nieces and nephews.
He is preceded in death by his parents, his wife Delora, his son Kyle, his sister Thelma, and brothers: Harry, Clarence, Glen and Sylvester.
Visitation will be from 5-8 p.m. October 12, 2022 at Wevley Funeral Home in Sebeka, MN and one hour prior to the service at the church.
Funeral Services will be held on 11 a.m. on October 13, 2022 at Hope Chapel, rural Verndale, MN. Interment will be at Wadena Cemetery.
Arrangements are entrusted to Wevley Funeral Home of Sebeka. Online condolences may be left at www.wevleyfuneralhome.com.