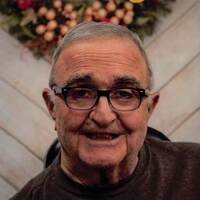 Jayson Leroy Graba, 88, of Grand Forks, ND, passed away on October 9, 2022, at Valley Senior Living.
He was born February 12, 1934, in Wadena County, MN, to his parents Cliff and Cora (Platten) Graba. Jayson grew up on the farm with his six siblings. He moved to Bottineau, ND for college, where he played football, and met his wife Helen Puppe. After they were married, they moved to Riverdale, ND where he worked on the Garrison Dam. They later moved to Minot, ND where he worked as the business agent for the local labor union. In the mid 1960s, the family moved to Grand Forks, where he became the business agent for the labor union, Local 580. Jayson became the personnel director for the city of Grand Forks until he retired. His proudest accomplishment was when he was a member of the North Dakota State House of Representatives and Senate. Helen passed away in 1987. Jayson married Marilyn, and they spent 32 years together. Jayson retired to Sebeka, MN and Mesa, AZ. He spent his final year back home in Grand Forks with family.
Jayson took pride in being an active member of his community. He was part of the Lyon’s club, active in church functions, and enjoyed his park community in Mesa. He loved watching all sports, but his favorites were football, UND hockey, and Minnesota Twins. His favorite activity was spending time with his family. Jayson was a friend to all, loved to tell stories, and had a great sense of humor.
He is preceded in death by his parents, wife Helen, and siblings; Jim, Joyce, Jack, and Jerry.
He is survived by his children: Rick (Cheri), Kathy (Keith) Roed, Mike (Michelle), and Tammy (Gerald) Elm. His grandchildren: Ryan, Nicole (Eric), Nettie (Grant), Keaton (Tessa), Shantel (Brandon), Hollie, and Haylee (Justin); great grandchildren: Owen, Blair, Laken, and Emma. Siblings: Janice Buckingham and Joe (Sylvia), and many nieces and nephews.
A memorial service was held on Monday, October 17, 2022, at Calvary Lutheran Church in Grand Forks, ND. In lieu of flowers, donations to NDAD of Grand Forks are appreciated.
Arrangements were entrusted to Amundson Funeral Home of Grand Forks, ND. Online condolences may be left at www.amundsonfuneralhome.com.