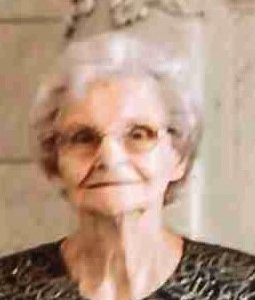 Jennie (Makinen) Haataja, age 93 years, 51 days, passed away on Sunday, October 23, 2022, at The Homestead in Anoka, Minnesota. In May of this year mom was diagnosed with abdominal sarcoma. She chose no treatment. She faced her cancer with dignity and had no fear of death as she knew where she would be going when she passed – to the arms of her Savior. She had lived in north Minneapolis for almost 67 years before moving to the Homestead in July 2022.
Mom was born on September 2, 1929, to John Henry and Jennie Waldena (Jonas) Makinen on the family farm southwest of Park Rapids, Minnesota. A neighbor, Mrs. Pietila, was the midwife. Mom was the fourth of six children, and they all lived in a two-bedroom house. After some years, a large house was built. After graduating the eighth grade she attended Park Rapids High School, from which she graduated in 1948. Then she came to Minneapolis and lived in an apartment with three other gals. She worked and also attended Northwestern Bible School for one year and then Vocational Tech Institute, where she graduated in 1951 as an LPN. She first worked in hospitals, then in nursing homes. In 1969 she started private duty. She loved the one-on-one care she was able to provide for her patients. Many were wealthy and she would travel with them for winters down south such as California and Florida. Mom furthered her education in the early 1970s when she attended North Hennepin Community College in Brooklyn Park. She graduated with an Associate degree. Mom never really retired, caring for others into her early 90s. She last took care of her
son, Duane, who was in declining health, until he entered care facilities and then passed away on April 6, 2021.
Mom liked to play Scrabble, read the BIble and stories about England, spend time with family and friends, and talk on the telephone! Back in the day she would make Finn bread and delicious cinnamon rolls. She was a very hard worker and was so organized. She had even updated her phone book shortly before her passing.
Mom and dad, Rudolph Haataja, met through a cousin. They married in June 1954 at Bethany Lutheran Church southwest of Wolf Lake. Three children were born to them – Doris, Duane, and Timothy.
Mom is predeceased by her husband Rudy in 1994; son Duane in 2021; her parents; siblings Nestor (Gladys), Edwin, Ellen (Edward) Honga, and Martha (Clinton) Younker; aunts and uncles; and cousins.
She is survived by daughter Doris (Dan) Hanson of Champlin; son Timothy (Judy) Haataja of Lakeville; grandchildren: Alanna Hanson, Adam (Gina) Hanson, Denise Hanson, Amy (Bruce) Janovec, Paul Haataja, and Andrea (Ryan) Cook; great-grandchildren: Davion Smith Hanson, Kathryn (Kallie) Smith Hanson, Silas Abrahamson, Olivia Schraufnagel, Daniel (Danny) Hanson, and Liam Haataja; great-great-grandson Kashrael Smith-Newsom; brother Emil (Jean) Makinen of Boise, Idaho; sister-in-law Karen (Makinen) Jonas of Park Rapids; sister- and brother-in-law Fred and Thelma Halonen of Cokato; many nieces and nephews; cousin Hazel Johnson; and dear friends.
Funeral services were held Friday, October 28, 2022 at Gearty-Delmore Funeral Chapel in Robbinsdale, Minnesota. Pastor Renee Franzen of Brookdale Covenant Church was the celebrant. Burial was Saturday, October 29, at Balmi Cemetery, north of Wolf Lake, Minnesota. Pastor David Walsh of Christ Lutheran Church was the celebrant. Active pallbearers were Timothy Haataja, Daniel Hanson, Adam Hanson, Paul Haataja, Davion Smith Hanson, and Kermit Ylitalo. Honorary pallbearers were her grandchildren, brother Emil Makinen, nephew Gerry Makinen, special friend Eldon Niskanen, former neighbor David Paulson, and Arnold Stewart, mom’s lawn man. The funeral service may be viewed soon on the Gearty-Delmore website under mom’s name.
Mom had a beautiful and favorite aqua knit top and pleated skirt, which she wore for her engagement photo. She had kept this in her cedar chest for the last 70 years. While preparing her home for sale this summer, this outfit was found. Mom was buried in her favorite outside, as well as her Bible.
The family wishes to thank North Memorial Hospice for their care of mom, and the many friends and family who called, sent cards, and/or visited mom in her last months. Anyone wishing to send a card may send it to Doris Hanson, 909 Oakwood Terrace, Champlin, MN 55316.
Lastly, mom started to use the word “awesome” in the last few years. It was her favorite word. I can just imagine that when she arrived in Heaven she said, “This is soAWESOME!”
Arrangements were entrusted to Gearty-Delmore Funeral Chapel of Robbinsdale. Online condolences may be left at www.gearty-delmore.com.11-2pd