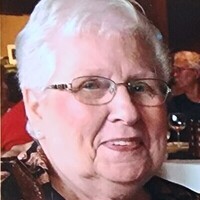 Judith Mae (Heino) Nielsen of Wadena, MN was called home by her Heavenly Father Saturday November 12, 2022. Judy was born December 17, 1941, to William and Esther (Carpenter) Heino at their home in Sebeka, MN. She graduated from Sebeka High School in 1959. After graduation she worked at Sloan’s Resort in Park Rapids before moving to Minneapolis where she worked at Sears and then Nabisco.
On September 2, 1961, she was united in marriage to Holger Michael Nielsen, and they were blessed with three children: Trudy (1962), Andrea (1966), and Randy (1971.) The young family moved back to Sebeka in 1967 and to Wadena in 1970. Judy worked at the Sebeka Co-op and after moving to Wadena, she began her thirty-year career as a very successful Avon Representative. She was loved and respected by her customers and built many lifelong friendships through her Avon work.
Judy was a very loving, thoughtful, and generous angel whose hobbies and interests were almost exclusively centered around her family and friends. She excelled at baking, and would knit and crochet gifts of slippers, mittens, scarves, along with her beautiful afghans. Family games, whether in the yard or at the kitchen table, were always accompanied with smiles, laughs, and memories created. She enjoyed travelling the nation to visit family and friends, as well as relaxing at the lake, taking in a ball game, or simply drinking coffee and visiting.
Judith is survived by her husband of 61 years Holger “Mike” Nielsen; her three children: Trudy (Ricky) Anderson of Fargo, ND, Andrea (Craig) Stevens of Moose Lake, and Randy (LaShawnda) Nielsen of Laporte. She is also survived by four brothers: Bill (Pat) Heino of Chetek, WI, Jack (Mary) Heino of East Moline, IL, Ted (Pam) Heino of Wadena, and Mike (Sharon) Heino of Sebeka, and her sister Alice (Mel) Ollila of Wadena. Judy loved to play and spend time with her eight grandchildren and nine great-grandchildren as well as her countless nephews, nieces, and neighborhood kids that she could spoil to her hearts content.
She is preceded in death by her parents William and Esther Heino, and her sisters Darlene (Dick) Bird of Louisville, KY; and Twyla (John) Riski of Sebeka, MN.
She is now embraced in the loving arms of our Heavenly Father.
Funeral Services will be held 1 p.m. on Tuesday, November 22, 2022 at Grace Lutheran Church in Sebeka, MN with visitation two hours prior to the service at the church. Interment will be at Green Hill Cemetery.
Arrangements have beene entrusted to Wevley Funeral Home of Sebeka. Online condolences may be left at www.wevleyfuneralhome.com.