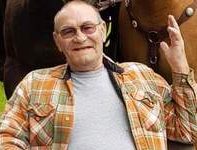 Lyle Allen Downer died on November 10, 2022 in his home in Huntersville, MN at the age of 74 years, 9 months, and 19 days.
Lyle was born to Fay and Ruby Downer in Huntersville, on January 22, 1948. He went through country school and on to Menahga school and graduated from there to the big world where he began his career of logging.
In 1966 he was joined in marriage to his high school sweetheart Sheila and this union was blessed with three children: Doran, Rebecca and Terry. He loved his children dearly and done all he could to raise them properly. He worked a period of time at the turkey farm and for a short time at the concrete plant. He also did some farming, with 36 head of beef cattle. From there he went full speed into logging, trucking, with a shavings and sawmill. He stayed in the logging and trucking until he got so sick he had to give it up! Lyle’s main “FUN” was working! Cutting firewood with his kids, working, playing with and watching his grandchildren and great grandchildren. Raking and cleaning the yard. Puttering with his many lawnmowers and other projects. And to take that “just got it running lawnmower” for a test drive, even if it was just to the mailbox where he got stuck!
Lyle also took great joy in visiting with his many friends and relatives!
Lyle is survived by his beloved wife of 56 years, Sheila; his children: Doran (Diane) Downer of Huntersville, Rebecca (Kevin) Lapinoja of Huntersville, and Terry (Robin) Downer of Mesa, AZ; his 10 grandchildren: Wayne, Jamie, Meagan, Jacob, Angel, Rachel, Mitchell, DomRee, Adam, Briana, and his nine great grandchildren. His sisters: Alice Day of Badger, and Ruth Ann Frisbie of Nimrod, brother Blaine Downer of Foley, and his many nieces and nephews and countless friends! He is preceded in death by his parents Fay and Ruby Downer, his brothers Kenneth (Rusty) Downer, DeWitt Downer, sister Faye Lubhan and brother David Downer.
Memorial Services will be held at 2 p.m. Wednesday, November 16, 2022 at Eastside Christian Church, 16623 State Highway 87, Park Rapids, MN with visitation one hour prior to the service at the church. Inurnment will be at Shell City Cemetery at a later date.
Arrangements are entrusted to Wevley Funeral Home of Sebeka. Online condolences may be left at www.wevleyfuneralhome.com.