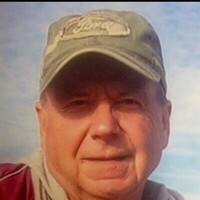 Melvin Kenneth Hotakainen ventured into his new hunting grounds in glory on November 13, 2022. He passed at home, after a lengthy battle with cancer. He was 81. Mel was the fourth of nine children born to Arne and Kaino (Heino) Hotakainen on August 21, 1941. He grew up on the family farm in Paddock Township, milking cows and doing chores while his dad worked on the railroad. He overcame polio as a child and went on to excel in baseball, graduating from Sebeka High School in 1959. On June 10, 1972 he married Sebeka’s first homecoming queen, Leona (Swehla) LaValley in Embarrass. They moved to Sebeka shortly after, settling on property right next to the family farm, where they lived together until Leona’s death on December 8, 2018. Mel spent 50 years beautifying the land, planting trees, building trails and deer stands. He made the place look just like a beautiful park! He was an avid hunter and loved snowmobiling, gardening, watching wildlife and driving his John Deere. He was also a huge fan of the Minnesota Twins, being especially proud of the baseball glove that he reconditioned after buying it for $85 in his senior year of high school. Mel worked in the mines on the Iron Range, as a journeyman carpenter in the Twin Cities and Sebeka area and at Lund Boats in New York Mills, where he retired in 1999.
Survivors include five siblings and their spouses: John (Carolyn) of Sebeka, Marv (Stephanie) of Winter Haven, FL., Barb Fosteson of Sartell, Rob of Washington D.C., and Jerry (Kathy) of Lino Lakes; sisters-in-law: Iris Hotakainen of Virginia, MN., and Amy (Robert) Broden of Great Falls, MT.; stepson Don LaValley of Staples; step daughters: Jeanne Miller of Staples, Mary LaValley of Tower, and Mona LaValley of Fergus Falls; an aunt Martha Heino of Woodbury,; six step grandchildren; 15 nieces and nephews including Jody (Kenny) Blake who helped to care for him during his illness; and dozens of cousins, great nieces, nephews, and step grandchildren. Mel was preceded in death by his loving wife Leona; his parents Arne and Kaino; three older siblings, Raymond, Hazel Klimek, and Kenneth (infant); stepson Jim LaValley; sister-in-law Sandy Hotakainen; and brothers-in-law Harold Klimek and Marvin Swehla.
A private family gathering is being planned for a later date in the spring.
Arrangements are entrusted to Wevley Funeral Home of Sebeka. Online condolences may be left at www.wevleyfuneralhome.com.