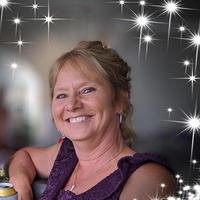 Susan Muriel Kinnunen (Wiita) age 57 passed away on November 21 at her home in Battle Lake, MN. Sue was born on December 14, 1964 in Duluth to Arnold and Flora Wiita.
As a young child the family moved from Duluth to Minneapolis. Later they moved to Sebeka where she attended and graduated from Sebeka School. She went to college in Brainerd and got a degree as a dental assistant. She met and married Bruce Kinnunen in 1984. They had three children, Justin, Josh and Kristy.
She worked multiple jobs over her lifetime from dental assistant, insurance, various school jobs, and self-employed. Later, she moved to Dickinson, North Dakota where she started a career at Blattner Energy. That job took her to various locations including California, Indiana, and Nebraska. From there decided to buy a house in Battle Lake working for Arvig.
Sue loved to travel and hike. She enjoyed riding horse, playing and coaching volleyball, and golfing. She loved spending time with her children and her granddaughter. She was very outgoing and would make new friends in all of the different locations she has been in life.
Sue will be sadly missed by her loving family, children: Justin Kinnunen, Josh Kinnunen, and Kristy (Jason) Steinke; and one granddaughter Sydney Steinke; four sisters: Shirley Jamison, Sandy Lehner, Sherry Minor, and Shelly Wiita.
Sue was preceded in death by her parents Arnold and Flora, and sister Sara.
Visitation will be held from 5-7 p.m. Wednesday, November 30 at Wevley Funeral Home in Sebeka and continue one hour prior to the service at the church.
Funeral Services will be held at 11 a.m. Thursday, December 1 at Our Saviour’s Lutheran Church in Sebeka.
Arrangements are entrusted to Wevley Funeral Home of Sebeka. Online condolences may be left at www.wevleyfuneralhome.com.
11-30