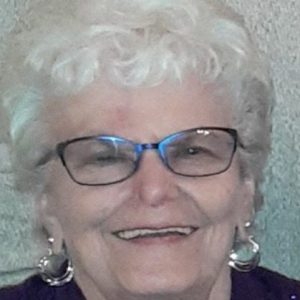 Deloris Lamb, 80, of Akeley, MN passed at St. Joseph’s Hospital in Park Rapids, MN from this life to eternity on December 23, 2022.
Deloris Ruth Rogers was born in Pine River, MN on January 18, 1942, to Harold (Pep) and Ruth Rogers. She was raised on a farm west of Backus and graduated from Backus HS in 1960. She then went to Minneapolis to work and met her husband, Frank in June 1960. They instantly fell in love and were married at the Methodist church in Akeley on November 5, 1960. They lived in Minneapolis for a short while, then Akeley when Frank, Jr. was born in 1962. They then moved west to Arizona, then California where Wanda was born in 1963. In 1964, they moved back to Akeley and worked various jobs until they purchased the grocery store in 1966. In 1967, Vincent was born. Frank and Deloris owned the grocery store 30 years. While working at the store, she began catering and decorating cakes. She was a very gifted and accomplished cake and cookie decorator and received many praises and referrals. She was very active in the Methodist Church, Lion’s Club, Chamber of Commerce and Cemetery Association.
She loved to travel which included a favorite trip to Hawaii with her mother and sister, Marvel. Her other travels included many trips with various friends with stops along the way to visit friends and family. She enjoyed baking cookies and started the Christmas Cookie Walk at the church. She also enjoyed playing cards, planting her flowers, bingo with her lady friends, pontoon rides, going out to eat, entertaining and all the dances that husband Frank played at.
Deloris will be lovingly remembered and dearly missed by her husband Frank; her children: Frank, Jr (Tippy Gregg) of Akeley, Wanda (Bucky) Lindow of Cannon Falls, and Vincent (Violet Struss) of Esko; her grandchildren: Braxton (Ashleigh) Lindow of Hampton, Quinton Lindow of Cannon Falls and Carlton (Kalysa) Lindow of Cannon Falls; brother H.R. “Butch” (Barb) Rogers, sister Marvel (Bob) Olson, sister-in-law Karen Rogers, brother-in-law Karl (Pat) Lamb, aunts, nieces, nephews and many cousins.
She was preceded in death by her infant son, her parents, brother Gerald (Dean) Rogers and infant sister.
Deloris was filled with amazing grace. A celebration of life will be held January 7, 2023 at 11 a.m. at the Akeley Methodist Church with visitation one hour prior. The pallbearers are her grandchildren.
Arrangements were entrusted to Jones-Pearson Funeral Home of Park Rapids. Online condolences may be left at www.jonespearson.com.