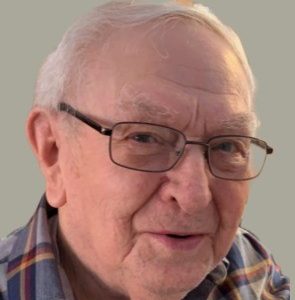 Hilman Maynard “Jake” Jacobson, age 91, a long time resident of the Park Rapids area, passed from this life to eternal life on Friday, December 30, 2022 at the CHI St. Joseph’s Hospital in Park Rapids with his loved ones at his side.
Jake was born on December 18, 1931 in Sisseton, South Dakota to Halvard and Mattie (Seal) Jacobson. He attended country school and grew up working on his parent’s farm. He attended Sisseton High School and graduated with the class of 1950. As a young man he moved with his parents to the Park Rapids area in 1952 where they continued to farm.
He entered the US Army in 1954 and served his country in Korea until his honorable discharge in 1956.
On August 27, 1955, Jake was united in marriage to Florence Rolstad in Sisseton, SD and dedicated his life to his family. He and Florence were blessed with four daughters and one son.
After his discharge, he did some farming and milked cows for a few years while also working for Midland Coop in Park Rapids. In 1968, he sold the cows and moved the family to Sebeka to work at Midland Coop.
In 1970, the family returned to Park Rapids and he started to work at the Skelly gas station. In 1975, he purchased the business.
In 1981, he left the “full-service gas station business” and was owner/operator of Jake and Tom’s Car Care which he ran until he was over 80.
Regardless of how busy he was, he always had time for coffee and friends. He loved to tell stories of the old days, and show collectables of car parts and see if people could guess what things were.
Jake is lovingly remembered by his wife, Florence, with whom he enjoyed 67 years of marriage; his five children: Nancy (Chuck) Culhane of Lake Nebagamon, WI, Norma (Dick) Dissmore of Menahga, Tom Jacobson of Park Rapids, Diane (Gary) Hensel of Park Rapids and Darla (Brent) Fisher of Shakopee; eight grandchildren and many great grandchildren, as well as nieces, nephews, other relatives and many friends.
He was preceded in death by his parents; three brothers: Selmer, Ervin and Erling and one sister, Lillian.
Services were held January 6, 2023.
Arrangements were entrusted to Jones Pearson Funeral Home of Park Rapids. Online condolences may be left at jonespearson.com.