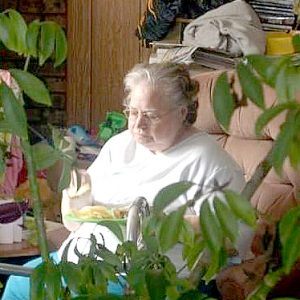 Louisa Elizabeth Buckley, age 89, entered the gates of Heaven on Monday, January 2, 2023 at the Green Pine Acres Nursing Home in Menahga, with her sister Lena at her side.
Louisa was born on June 12, 1933 on the family farm near Park Rapids, MN. As a girl she attended country school near her parent’s farm. She went on to graduate from the Park Rapids High School with the Class of 1954. After her graduation she went to work for the Newman family as a maid and child attendant for eight years. She then went to work for the Fingerhut Corporation. Later, she ventured to Minneapolis where she worked as a house cleaner for a prominent attorney. In the later 1960s she met Gene Buckley and the two fell in love. They were soon married and started building a family. They were blessed with four sons and a little girl. Louisa was a devoted and loving mother, who besides caring for her own children, took in other needy children and gave them a warm loving home. She and Gene moved to Texas in the spring of 1968, where her oldest son, John was born. After a year in Texas, they moved to Washington state where the rest of her children were born. In 1976, they returned to the Park Rapids area where she devoted herself to caring for her family. Her spare time was filled with knitting and sewing clothes for her children. She also worked with the special Olympics and worked hard to get them to come to town on a regular basis.
She is lovingly remembered by her four sons: John (Kelly) Buckley of Park Rapids, Jade Buckley of Pillager, Josh (Cleo) Buckley of Park Rapids, and Jeremiah Buckley of Park Rapids. Her four brothers: Otto, Everett, Dano and Frederick; and one sister, Lena.
Her life was deeply saddened by the death of her daughter, April who was killed in a tragic accident with a horse. She is also preceded in death by her sister, Ellen and two brothers: Harry and Francis.
Services will be held 2 p.m. Friday, January 13,2023 at the Jones-Pearson Funeral Home with Rev. Fred Brown officiating. Visitation will begin an hour prior to the service.
Arrangements were entrusted to Jones Pearson Funeral Home of Park Rapids. Online condolences may be left at www.jonespearson.com.1-11c