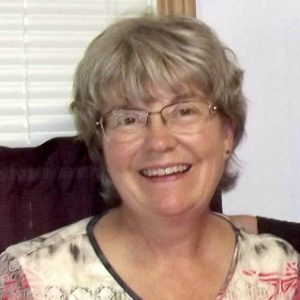 Charleen West was born was born March 23, 1956 in Graceville, Minnesota and raised on her family farm.  She attended and graduated from Graceville High School in 1974.  Char then attended Fergus Falls community college where she earned her Associates degree and met her future husband Stephen West.  They moved to the Twin Cities and were married in 1976.  They had three girls which they raised in Menahga, MN.  She worked part time with the City of Menahga until becoming the Menahga City Administrator in 1982, which position she held for 25 years.  She took on a new adventure successfully running for and being elected to Wadena County Auditor for 10 years.  She then returned to Menahga as their City Administrator until her retirement in 2016.
Char loved to garden, sew, camp and be with her family, especially her eight grandchildren. There were many camping trips and memories shared with family and friends across the United States.
Char lost her battle with pancreatic cancer on Friday, January 6th where she passed peacefully at home with Steve by her side.  She is survived by her husband, Stephen West of Menahga.  Her daughters, Jodie (Jon) Bourgerie of Shorewood, MN, Leah (Matt) Krause of Eagle Lake, MN and Sarah (Emmett) Penke of Ely, MN.  Her eight grandchildren, Caitlin, Emma, Rosalie, Sean, Hannah, Eadaoin, Amelia and Aleck. Her siblings Linda (Randy) Gauger of Ulster Park, NY, Alan (Carol) Buller of Graceville, MN, Diane (Dave) Vogt of Johnson, MN, Mary Buller (sister-in-law) of Graceville, MN and many nieces and nephews.  She is proceeded in death by her parents Norbert and Jean (Taffe) Buller and her brother Neal Buller all of Graceville, MN.
Arrangements were entrusted to Karvonen Funeral Home of Wadena. Online condolences may be left at karvonenfuneralhome.com.