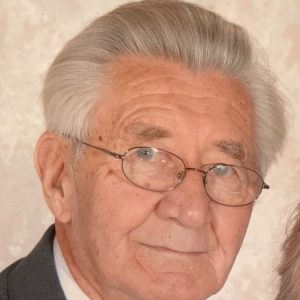 Roy Ernest Skoog, age 95, passed away on January 5, 2023, at Engel Haus Assisted Living in Albertville, Minnesota. He was born in Virginia, Minnesota on November 15, 1927. The third child of Saima and Olaf Skoog, Roy’s early years on the family farm in Wolf Lake were character-building. While his father was in a sanitarium with tuberculosis, Roy bonded with his brothers over barn chores, chopping wood, and helping his mother run the household.
Born with a cleft palate and a lifelong speech impediment, strangers might have considered him a man of few words. But to friends and family, Roy was a robust storyteller. At age 32, he met and married a social butterfly, Mary Ruonavaara, and together they raised 9 children. He was known to have sweet tooth and Mary enabled this by making sure that the cookie jar was never empty.
Retiring in 1989, he spent hours in the wood shop making chairs, clocks and mirrors by the dozen and gifting them to his children and grandchildren. Roy enjoyed reading the newspaper and books on American history. His days centered around coffee and cookie breaks at the kitchen table with “Ma.” But the highlight of his retirement years were long road trips zig-zagging the country visiting friends and family with Mary by his side. He delighted in watching grandchildren play on his living room floor.
The Gospel of the forgiveness of sins was his source of strength and what he leaned on until the end of his earthly life. Roy and Mary had a home where visitors were always welcome and were accepted as they were.
Roy is survived by nine children: Juliana (Gerald) Johnson of Skanee, Michigan, Janet (Karl) Niemela of Lake Stevens, Washington, Thomas (Janet) Skoog of Otsego, Minnesota, Dale (Laura) Skoog of Rogers, Minnesota, Darlene (Tim) Sutinen of Phoenix, Arizona, Andrew (Hanna) Skoog of Waverly, Minnesota, Wayne (Susan) Skoog of Greenfield, Minnesota, Annemarie (Steve) Jones of Longview, Washington, and Jennifer Skoog of New York, New York; 66 grandchildren, 56 great-grandchildren; siblings Arthur Skoog and Esther (John) Martin, sister-in-law Edna Skoog; He is preceded in death by his wife of 62 years, Mary Skoog; parents Olaf and Saima Skoog, brothers Walter, Rudolph, Kenneth, and Harvey Skoog and grandchildren Brady Alan Niemela and Ashley Rose Johnson.
Visitation to be held from 5:30 – 8 p.m., with 7 p.m. prayer on Monday, January 9, 2023 at Cokato Laestadian Lutheran Church and continue at 10:00am on January 10, 2023, followed by the funeral at 11:00am. Burial will follow services at the Finnish Cemetery in Cokato, Minnesota.
Arrangements by Swanson-Peterson Funeral Home of Cokato, MN. Online condondolences may be left at www.swansonpeterson.com.