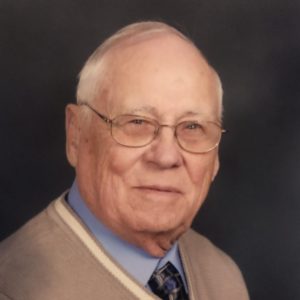 Stanley Charlton Stephenson – After 95 ½ years, covering 11 decades, Dads’ successful journey here on earth came to an end on January 15, 2023, at his home with his loving wife of 71 1/2 years, Betty, by his side.
Dad is preceded in death by his parents, L.C. “Chuck” Stephenson and Effie Pudas Stephenson; parents in-law, Ernest and Hildur Thompson, grandparents, sisters and brothers-in-law; Verna Stephenson Funk (Irvin), Florence Stephenson Fallstone (Sidney), and Charlotte Stephenson Jessen (Doug); sister-in-law Beverly Limanen Stephenson, and many aunts, uncles, cousins, and a long list of friends.
Besides his wife Betty, he is survived by daughter Janis Moore (Bob); and sons: Michael (Joan), Brian (Renee), and Lee (Ann); grandchildren: Charlie (Heather), Joe (Emily), Scott, Dan, Sarah, Katie (Paul), Tyler (Dayna), Ryan, Evan, Grace, and Laura, as well as 13 great-grandchildren: Kaden, Owen, Henry, Ben, Ellie, Andy, Abby, Will, Allie, Bri, Blake, Josephine and Stanley; brother Lester of Sebeka; special cousins: Janet Jacobson and Connie Bennett, cousins and many nieces and nephews.
Dad was born on a small farm southwest of Sebeka, MN on June 11, 1927 and grew up on various farms in the Sebeka area, close to grandparents and many aunts, uncles, and cousins. Although he lived in the country, Dad never attended country schools, but was schooled in town for all 12 years and graduated with the Sebeka High School Class of 1945. Shortly after graduation, Dad was drafted into the US Army; after a few weeks, he was transferred to the US Army Air Corps and then transitioned to the US Air Force, promoted to the rank of Sergeant. He was very proud of his time in the service. He often said, “I did what they asked me to do”. Upon receiving an honorable discharge, he returned to the Sebeka area, helped on the farm, and worked as a mechanic at the Co-op garage. In the late 1940s he met Betty Thompson of Bluegrass, MN. They were married in Bluegrass at Bethany Lutheran Church on June 3, 1951. They made their first home in Wadena, followed by moves to Moorhead, Plymouth, Grapevine, TX; Becker, and finally to Park Rapids, making many lifelong friends along the way.
In 1950, his future father-in-law encouraged him to come and work for the Johnson Service Company of Milwaukee, WI. He would work there for the next 38 years, starting as a union pipefitter, ending his career as an estimator and project manager. He enjoyed the challenge of both building or fixing almost anything.
In the 1970’s he purchased eighty acres of his parents Redeye Township farm, in part to help his folks and for something to call his own. In the early 1980’s, he built a pole barn to store the belongings he did not want to move down to Texas … a boat, a 5th wheel camper, his prized 1966 Mercury convertible and later, his 1942 Ford 2N Tractor. A small cabin and a bunkhouse were added and a sauna house, built by son Brian. Dad and Mom spent over 30 years summering at “the farm” and snow birding back home to Texas and for many years, Orange Beach, AL. His journey included being a beekeeper, trips to the horse races in Winnipeg, and traveling to Scandinavia. In the late 1950s he, along with his father-in-law Ernie, brothers-in-law Harold Baker and Leonard Thompson, built a vacation cabin on Duck Lake in Hubbard County, MN. He loved being with family, enjoyed having his grandkids visit the farm; teaching many of them to drive the pickup or the tractor (at a very young age!), how to trap gophers, and how to grow pumpkins. From the time the Minnesota Vikings arrived in 1961, he was a loyal and enthusiastic fan; rarely missing a game on TV, attending countless games at Met Stadium and especially enjoyed tailgating (the biggest reason for the 5th wheel) with a special group of friends from Moorhead that they met in the 1950’s, even traveling to two Super Bowls. His favorite meal was creamed peas with boiled new potatoes and a slice of coconut cream or pumpkin pie. Dad was a man of faith and conviction, being baptized and confirmed in the Lutheran Church. He was very proud of his Finnish and Danish heritage and always proud to call Sebeka his home. A memorial service will be held this summer. Dad will have his remains buried at the Sebeka West Cemetery. The family would like to the thank the hospice caregivers from CHI St. Joseph’s Health Hospice and the staff and caregivers at Crystal Brook in Park Rapids for the love, concern and care they provided during this transition. Memorials may be directed to CHI St. Joseph’s Health Park Rapids (designate Hospice Care) or Our Saviors Lutheran Church in Sebeka, MN.
Arrangements were entrusted to Wevley Funeral Home of Sebeka. Online condolences may be left at www.wevleyfuneralhome.com.